CLICK ON THE THREE WHITE LINES IN THE ORANGE BAR TO THE UPPER LEFT OF THE SCREEN TO GET RECIPES!  THEY ARE ARCHIVED BY MONTH.  DON’T FORGET TO SUBSCRIBE SO YOU WILL GET ALL THE NEW RECIPES EMAILED AS SOON AS THEY’RE POSTED.   🙂

Well hello there, thanks for stopping by!

My name is Cathy and I now live in Texas.  I spent 47 years living in Halifax, Nova Scotia – Canada, before finding the man of my dreams and moving to where the winters are much easier to bear although the days at 107 degrees have me sometimes longing for a Nor’Easter.  We are parents to a sweet little dog named Bandit.  He’s a rescue shelter dog and we love him to bits!  He is part Australian Shepherd, part Husky and that makes for a cute combination.  He can’t seem to stay away from skunks but other than that he is the perfect little sweetie.

I’ve never tried beer, coffee or tea.  (That’s right, a Canadian that hasn’t tried beer or Tim Horton’s coffee!).  Crazy, eh?  I blend in alright with my fellow Texans except when I say the words, “out” “about” and “house.”  Then I usually get a puzzled look followed by, “Where are you from?”  Then I teach them all the funny phrases from up North, like saying that you’ll bring a “twofer” when you’re coming to a friend’s party.  What’s a twofer you may ask?  It’s when you drag a package of 24 cans of beer with you to the festivities.  But it’s a lot faster to say, “I’ll bring a twofer, eh?”

I love Pinterest, making crafts, collecting magazines (that I’ll probably never read again yet can’t seem to part with either), thrift stores, antique malls, yard sales and anything related to the beautiful states of Maine and Texas, and my hometown province of Nova Scotia, Canada.

I see humor in pretty much everything that life has to throw at me and I’d much rather laugh than ugly cry that’s for sure.

I don’t usually brag about going to expensive places, but I just left the gas station.  🙂

Quote:  Expect nothing and appreciate everything.

Success:  Sometimes success is just getting the laundry into the dryer before the mildew sets in.

Funny:  Overheard conversation between two 2nd grade boys. “Do you think you’ll ever fall in love?”  “I don’t know.  I think if she likes pancakes, then probably.”  🙂 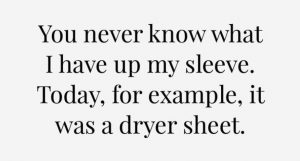